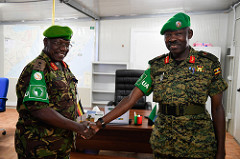 Lt. Gen. Lakara from Uganda takes over from Maj. Gen. Charles Tai Gituai who has completed his one year tour of duty.

It is his second duty tour having previously served as the Deputy Force Commander in charge of Logistics and Support from July 2015 to October 2016.

At an official handing over ceremony at the AMISOM Force Headquarters in Mogadishu, the out-going Deputy Force Commander, Maj. Gen. Gituai gave an overview of the progress and challenges in the ongoing transition process.

He cited the AU/UN joint review, the Operational Readiness Assessment (ORA) of the Somali National Security Forces (SNSF), the new Concept of Operations (CONOPS) document and the joint military operations against Al-Shabaab militants as some of the progress made in the past one year.

“This Mission is at a very critical stage as we will be implementing CONOPS, the Somali Transition Plan (STP) and Resolution 2431 of the UN, which are very specific on the objectives for the military,” the outgoing DFC said.

Lt. Gen. Lakara thanked his predecessor for his contributions and reiterated his commitment to ensuring the AU Mission achieves its mandate.

“I bring to this mission my passion, my Pan-Africanism, my commitment, hard work, and my experience,” the new DFC noted.

Prior to his appointment, Lt Gen. Lakara was the Commander of the Uganda Rapid Deployment Capacity Centre (URDCC), based in Jinja, Uganda.