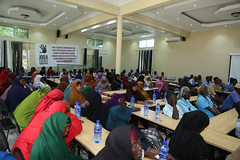 The one-day training held in Kismayo on Wednesday was part of activities to mark the ongoing 16 Days of Activism against Gender-Based Violence.

The 16 Days of Activism against Gender-Based Violence is an international campaign held every year to end violence against women and girls. The campaign starts on 25 November and ends with the marking of the International Human Rights Day on 10 December.

“During the sixteen days of activism, we recommit to ensuring the protection of women, girls, and children against GBV and conflict-related sexual violence in different countries, including Somalia,” said Jaase.

She noted that while gender-based violence affects mostly women and girls, men and boys are also victims of abuse.

“The campaign against gender-based violence should continue beyond the sixteen days of activism. We also need to recognise that men and boys are survivors of gender-based and sexual violence,” she added.

Barey Garweyne, a participant, said the training had created awareness on the importance of protecting the vulnerable in society.

“If we protect vulnerable women, children, and youth, society becomes healthy. I am grateful to the organisers of this awareness training,” Barey said.

Amran Abdi Hussein, another participant, expressed optimism that the training would contribute to efforts to end violence against women and girls.

“I look forward to the day when violence against women will end,” said Amran.

Abdirashid Hassan Mohamud, a member of the Jubbland Non-State Actors Association, noted that over the years, there has been increased awareness to end gender-based violence.

“This annual commemoration of the 16 days of Activism against Gender-Based Violence reminds us of our responsibility to protect the vulnerable,” said Abdirashid.