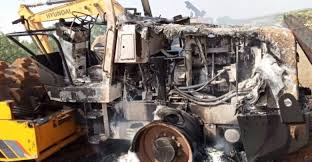 Al Shabaab militia on Sunday stormed a construction site in Mandera and blew up equipment worth USD $4000000.

Police reports indicate that the armed militia stormed the camp at Hagarsu within Bida sub location at 2.45am before executing the crime.

According to the police, the camp was being used as a holding ground for the machines being used to construct the Arabia-Mandera road.

The equipment that was destroyed at a construction site near Kenyan border with Somalia, included an excavator, flat roller machine, shift foot roller and a pressure pump.

Police and witnesses said the militants raided the site at dawn and burnt the equipment.

No one was injured during the incident on the Mandera-Arabia-Lafey road as the two guards who were on duty managed to escape.

The al-Shabaab militants have in the recent past intensified attacks along the Somalia-Kenya border targeting civilians and government installations.

In December, al-Shabaab fighters attacked a bus heading to Mandera and killed eight police reservists who are not natives of the region.

Police have so far arrested eight suspects for their alleged involvement in facilitating the attack on the reservists.