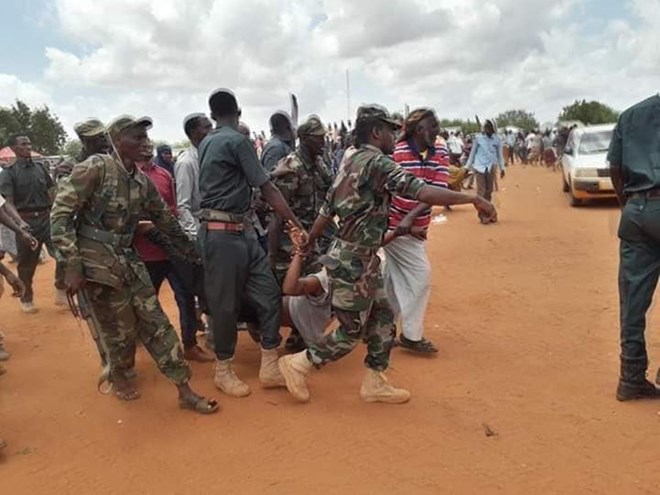 A suspected Al-Shabaab suicide bomber was dramatically intercepted by security forces at VIP section in Guri-El town where leaders were paying tributes to fighters who have fallen while defending the population against the militants.

The security milestone came barely a day after Major General Fatuma Ali, a respected soldier in Somalia and within AMISOM ranks, was killed in an explosion by Al-Shabaab militants.

According to Voice of America journalist Harun Maruf, the bomber, who was wrestled down by security forces, was targeting to blow hundreds who had turned up.

“Would-be suicide bomber wearing suicide vest wrestled to the ground, detained in Guri-El town (central Somalia) as he tried to blow himself up at a parade to commemorate Sufi fighters who died fighting Al-Shabaab. Source says he was heading towards VIPs when intercepted,” he said.

The veteran journalist added: “Suicide attack averted in Guri-El town today after a man strapped with suicide vests masquerading as a poet was arrested by Ahlu Sunna Wal-Jama forces. The man wanted to take the microphone saying he wants to eulogise ASWJ leaders, according to a witness in the crowd.”

Remarkably, she fought alongside KDF soldiers in AMISOM while liberating several towns including Kismayu. She died alongside her third husband, leaving behind nine children.

“She sacrificed as a mother of 9. Her 3rd husband, also a soldier was in the same vehicle, he died today. Her previous 2 husbands were also killed by Shabaab according to a person who knows the family,” said Maruf, adding that she was respected among soldiers.

The major security vigil milestone comes at the time Kenya is keen to beef up security along the border. All aircrafts from the neighbouring Somalia are landing at Wajir for further security checks before proceeding to Nairobi