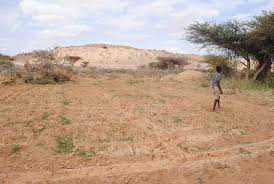 The Ministry of Agricultural development in Somaliland has announced the entry of locust swarms into Berbera and Lughaya coastal townships today. The minister, Mr. Ahmed Mumin Seed has said that his gov has sent a plea of help to Food Agricultural Organization (FAO) and the Locust Control Organization which is based in Addis Ababa, the Ethiopian capital. The invasion of swarms of locusts are reported to have spread in major regions in Somaliland including Lughaya, Gargaara, Agabar, Eil Lehelay in the north of the country.

Somaliland which is in the Gu season and farmers have done their best to plant seeds are on the brink of devastation that the desert locusts are probably to leave behind in a large scale unless the gov steps up its efforts to curb the spread of the locust in other regions in Somaliland. The minister has said that the gov lacks the capacity to combat the invasion of locusts and it is too late to send the plea and no one knows when it will be responded as urgent as they can. As far as the situation is concerned, it is likely that the not only farming community will be impacted but also the green environment in major parts in Somaliland will be at risk of the devastation from the locusts which pose a real risk at this time. It is not known of the urgent request that the agriculture ministry sent to Ethiopia based organization to respond to the invasion of the locusts in Somaliland. Somaliland has encountered a significant locust invasion in the past couple of years.