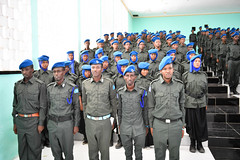 Mogadishu, 07 January—About three hundred (300) Somali police officers are undergoing specialized training at the General Kahiye Police Training Academy in Mogadishu, Somalia, after which they will form part of the Federal Darwish Police—a special tactics unit of the police.

“At the end of this training, our police special forces including the Haramcad, Darwish and the Birmad will be fully equipped and their combined capability will constitute a major force that can secure population centers,” said the Somali Police Commissioner, Maj. Gen. Abdi Hassan Mohamed, at the official opening ceremony of the training.

The Federal Government of Somalia has embarked on a drive to revive the Darwish special police unit by extensive recruitment and refresher training throughout 2020.

The Joint Police Program is a 5-year program led by the Federal Government of Somalia, with funding from the European Union, UK Aid and the German Federal Foreign Office. The Joint Police Program supports increased police visibility, presence, capability and accountability and the implementation of the New Policing Model in Somalia at Federal and Federal Member State level.

AMISOM Police Commissioner, Augustine Magnus Kailie, said such training was crucial in transforming the SPF into a capable force that can protect the people of Somalia.

“As we have come to assist, build your capacity, you also should be standing ready to see how best you can tap from the various experiences and support you will receive so that as the Darwish especially, you will stand firm to defend the people of Somalia,” AIG Augustine Magnus said.

The United Nations Assistance Mission in Somalia (UNSOM) Police Commissioner, Meinolf Schlotmann, urged the officers to work as a team saying success of their mission hinges on unity of purpose.

“If I can give you one advice only; please work as a team and that will make you successful. If you act as a team, the output will be much greater and you will have much more success to serve your communities,” said Meinolf.

Upon completion of the training, this unit will be integrated into the Somali Police Force and deployed to all the Federal Member States of the Government of Somalia.