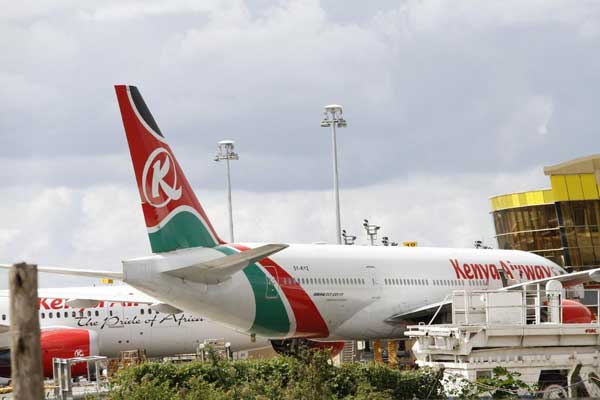 Kenya Airways planes at JKIA in Nairobi. On October 21, 2018 Kenya repatriated 17 Somali nationals who caused disturbance at Jomo Kenyatta International Airport when they were denied clearance to travel to Uganda.

Kenya on Sunday repatriated 17 Somali nationals who caused disturbance at Jomo Kenyatta International Airport when they were denied clearance to travel to Uganda.

The passengers, according to Immigration PS Gordon Kihalangwa, landed from Mogadishu but they could not be cleared because of security concerns and anomalies with their documents.

Kenya Revenue Authority, the police, National Intelligence Service, Port Health Service and other agencies have been strict on security as Kenya prepares to launch direct flights to the United States.

The repatriation matter came to the fore when Thika MP Patrick Wainaina said “illegal immigrants” had been casually handled by government officials at the airport.

The MP who had jetted in from the United Arab Emirates around 6am said while queuing at passport control, he saw three young men arguing with an immigration officer.

He added that they wanted the official to stamp their passports.

Mr Wainaina said he sought to find out what was happening and was referred to the officer on duty.

He was told that the three, “who were roaming freely at the airport”, were to be deported.

The lawmaker told the Nation that he discovered the immigrants were not three but 17. He took photos of the three men.

Mr Wainaina said when he demanded to be shown the plane to be used by the group, he was given a passengers manifest but the 17 were not included.

“It is not possible that they could have moved from terminal 1A to T2 within 10 minutes and boarded the plane. Deportees are usually confined and do not have room to persuade officers to allow them into the country,” the MP said, adding that he raised the matter with the National Assembly Security Committee.

However, committee chairman Paul Koinange told the Nation that Mr Wainaina’s account of the events contradicted one given by the JKIA management.

Mr Kihalangwa said the 17 were to be repatriated, not deported. He added that the airline that brought the group was indemnified to return them to Mogadishu.