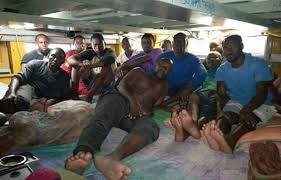 Thirteen Kenyan seafarers who were held captive in Somalia after their employer terminated their contract returned home on Wednesday.

The seafarers were released from captivity after lengthy negotiations between Kenyan and Somali government officials.

“We experienced hardship while in Somalia and we did not think that we would ever return home,” Mitau Makau, one of the seafarers told reporters in the port city of Mombasa.

The seafarers were recruited by a prominent agent in April and signed a two-year contract with a Thailand fishing vessel, which later turned to be a Somali vessel.

Makau said that they worked four months without pay in the vessel which had 50 crew among them Somali nationals.

“One time the boss took a gun and threatened to kill all Kenyans when we insisted on being paid,” said Makau.

He said the seafarers went for days without food, were denied access to essential services like medication and were sometimes forced to endure beatings from their employer.

“Kenya Maritime Authority and my office were not aware of the contracts which means it was not genuine,” said Makena.

East Africa ship-owners have in the past been accused of flouting labor laws and underpaying seafarers.

According to Seafarers Union of Kenya, the Kenyan coast has more than 2,000 seafarers with only half being trained. Majority of them remain unemployed, making them vulnerable to unscrupulous agents.