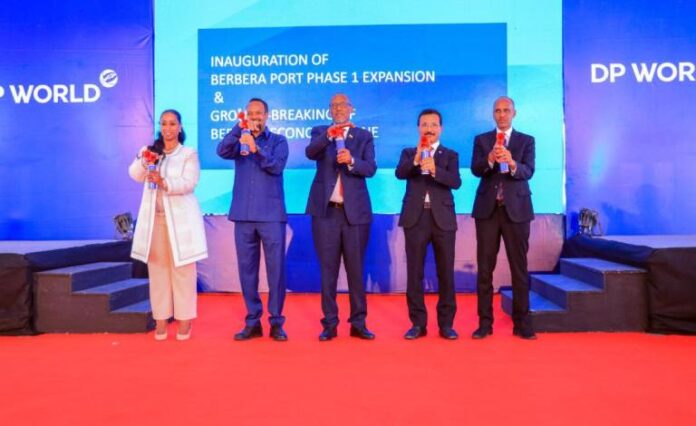 May 10, 2016, was a major day for Somaliland and the Horn of Africa as a whole, a legacy and historical record of President Ahmed Mohamed Mohamoud (President Siilaanyo) and his government..

Former Somaliland President Siilaanyo courageously signed a 30-year agreement with DP World to expand and operate the port of Berbera at a cost of $442 million.
The deal that is by far the biggest and the most noteworthy international direct investment (FDI) agreement ever signed in Somaliland,
An opportunity and a potential agreement that will fundamentally and substantially transforms the Somaliland economy in all aspects.
$442 million invested by DP World with a 30-year lease to DP World, and millions of dollars of investment in Berbera Corridor and a giant 12 square kilometre greenfield Free Economic Zone
On May 10, 2016, I wrote the accompanying article in support of the monumental investment in the port of Berbera. As shown in this article. Please access the link.
The expansion and upgrading of the port of Berbera will undoubtedly stimulate or boost the economy of Somaliland in a spectacular and remarkable way.
As always, I support all the positive elements that are emerging in Somaliland and I emphasise my disagreements with all the negative aspects that arises or come to light in Somaliland
I have been one of the most ardent, most staunchest, enthusiastic and a vocal advocates for expanding or broadening the port of Berbera, where many Somalilanders objected to the proposed expansion of the port of Berbera on the basis of an unknown and in some sense illogical, and to a certain extent, during that period, I managed to lose some of my social media friends due to our disagreement over the port expansion.
Today, like everyone else in Somaliland, I am delighted to see the happiness and comprehension of the general population.
for the accomplishment of Port Berbera, whether or not they agreed with the plan to expand the port.
I am also very pleased that some of the officials who spoke out against the extension of the port attended the opening ceremony.
On 24th May 2021, Somaliland and DP World inaugurate the first phase of the newly built terminal of Berbera port by DP World.
Another great day for Somaliland
What is the significance for Somaliland?
This means that Somaliland and DP World are opening the first phase of the new container terminal at Berbera Port, followed by the second phase currently in progress.
This means that when the work on phase two which is currently in progress to expand is completed, the port will fundamentally transform the terminal’s capacity into a significant regional commercial center serving the Horn of Africa and beyond.
The new container terminal launched today will now increase Berbera’s container capacity by 150,000 equivalent twenty-foot units (TEUs) to 500,000 TEUs annually.
What does this mean for Somaliland or DP World?
This means that Somaliland and the DP world are now in a position to start and grow the economy, expand or increase trade, attract foreign direct investment, and develop jobs. Furthermore, following today’s launch of the new terminal and the ongoing second phase of the port extension followed by the highly anticipated economic zone along the Berbera corridor.
Phase 1 is now complete and the second phase of the port expansion is ongoing and is expected to be completed in the near future.
What does this mean for the port?
The completion of phase two of the expansion includes the expansion of the new dock from 400 to 1000 meters, which will allow the port to manage up to two million TEUs a year.
DP World has committed to invest up to 442 million dollars to develop and expand Berbera’s port. The continuation of the port’s expansion into a second stage and its integration with the special economic zone, which extend along the Berbera corridor.
DP World Berbera, which commenced operations from the port in March 2017, subsequently increased volumes by 35% and the productivity of vessels up to 300%, according to the statement published by DP World lately.

the Port of Berbera will become an important world-class commercial center that will provide competitive opportunities for regional trade.
Congratulations to Somaliland.