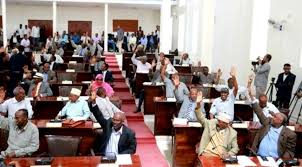 They both came before the House today for confirmation. However, That was not happened.

Before the votes was taken, the Interior Committee of the House of Reps. recommended not to confirm the nominees of both opposition parties.

The Committee stated that UCID’s nominee is also a member of the previous NEC which would have an active role in managing the day to day operations of the election.

On the other hand, the committee alleged that Waddani’s nominee could be relied upon being an impartial during the polls.

When it was time for taking the vote, neither nominee was able to secure the vote which would be enough for confirmation.

28 MP’s voted in favor of Abditafah, eight voted against him while 14 abstained.

With this vote, the house put another gridlock to the long overdue local and parliament polls in Somaliland.

It seems obvious that there was a contradiction over the name of Waddani party’s nominee to NEC while the House of Reps. today identified him as Mohamud Said Roble, Wadani party called him Abdikarin Yasin Sh. Dalmar in previous communications.

SL’s president Musa Bihi Abdi and the leaders of the two opposition parties rejected the decision of the House of Reps.

President Bihim Faisal Ali Warabe, and Abdirahman Irro met today after the house rejected to approve the nominees of the opposition to NEC.

Bihi said that the House’s verdict was not expected as the country has overcome the standoff over the electoral commission dispute.

The leaders have not disclosed what will be the next step that they would take.