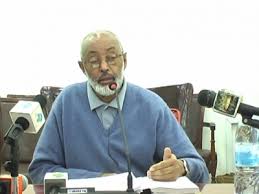 Former Somaliland finance minister has urged the incumbent president to declare his assets to the populace.

Mr. Mohamed Hashi Elmi has accused Bihi administration that there is widespread corruption in his gov.

The ex-minister for finance has urged the president must tackle to the gov ministers who are busy of building new houses.

At the same time, the ex-minister has also called on president Bihi to assure that the Auditor General must be operational.

Mr. Hashi has scathingly blasted Bihi’s gov of the lease in regard to the cement grinding plant in the port city of Berbera.

Raysut cement firm which is based in Oman entered into agreement with Somaliland gov where it will earn 55 percent share capital whilst MSG’s share is 45 per cent.

The former minister has lambasted that the country is capable of re-operating the cement plant without reaching an agreement with foreign firms.

Mr. Mohamed has said that there is no economic crisis and the 40 mln fund which is earmarked for jump starting the cement factory once again can be afforded.

He stated that money can be collected from the citizens if the gov is in debt.