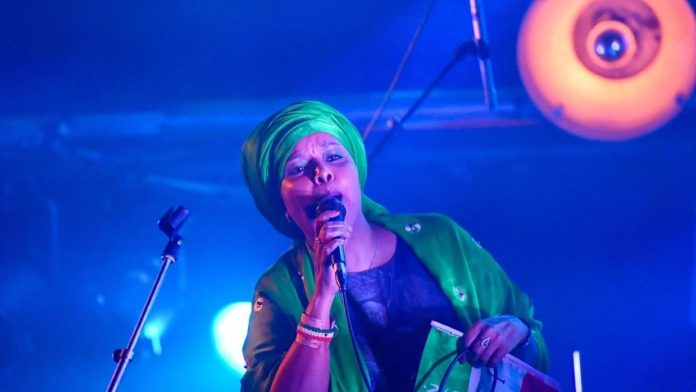 An emblematic figure in her country, Somaliland, south of Djibouti, but still little known in France where she has forged her voice by obstinacy, the singer Sahra Halgan tries once again to force the destiny to the Transmusicales of Rennes, where it occurs Thursday.

Born in 1972 into a family of poets and musicians, she wanted from a very young age to take up the torch of this cultural heritage. But being a girl is almost crippling for such an ambition in a society where the role of artist is not really reserved for women.

To the one who became mother of seven children, “we always said: + but who will marry a girl who sings? +”. In this traditional society, “a girl who sings is frowned upon (…) It is very very complicated, and it still is sometimes, but I wanted to be free”, she confides in a interview with AFP.

In 2015, after twenty years in France where she had obtained political refugee status because of the civil war in her country – years of youth where, she says, she had improvised nurse on the front and singer to comfort the wounded, Sahra Halgan returned to live in Somaliland, along the Gulf of Aden. It has established a cultural center dedicated to music and poetry in Hargeisa, its hometown and capital of this former British colony, which has been claiming independence since 1991 but which the international community still regards as an integral part of Somalia.

In France, at the same time as working as a maid to support her family, “I was singing at weekends (…) It was hard but I was free to continue doing what I loved (. ..) I sang in festivals for Somaliland, for the community! Now, I sing every Thursday and Friday in my center when I am in Hargeisa “.

A music marked by these influences of the Horn of Africa, mixing the traditions of the eastern part of the continent – Ethiopia is neighboring – the underlying imprint of a Middle East so close, the other side of the sea. With sometimes throbbing grooves reminiscent of the desert blues.

Written by her husband, her songs evoke “love, sadness, nostalgia for exile, reconciliation, politics …”, as in “Waa Dardaaran”, a form of politeness towards the notables that gives her title to his third album, released last year.

In this piece of the title track, she calls on political leaders, asking them to live up to their responsibilities, not to favor their own side and to strive to maintain equality between the different components of society .

The previous record was “rather acoustic, quite minimalist”, it is “more punchy, much more dancing, more rhythmic”, argues Aymeric Krol, one of two musicians who accompany him for ten years. With the electric guitar and percussion of the trio of origin has added for this last album a keyboard that enriches the musical palette.

In her multicolored veils, Sahra Halgan has toured the world with, so far, “a success of esteem” while she is “an icon” in Somaliland, notes the percussionist who, multiplying since about fifteen years back and forth between France and West Africa, draws a conclusion: in a world of music and globalized very compartmentalized, “it is not obvious for those who sing in their own language to make a place. quickly cataloged + world + But we wanted with Sahra take off this label + world + to do something more rock, more rough, more rough “with this latest opus.

To perform at the Trans is a “great chance,” says Sahra Halgan. “It has always been one of my dreams to sing for this festival!”