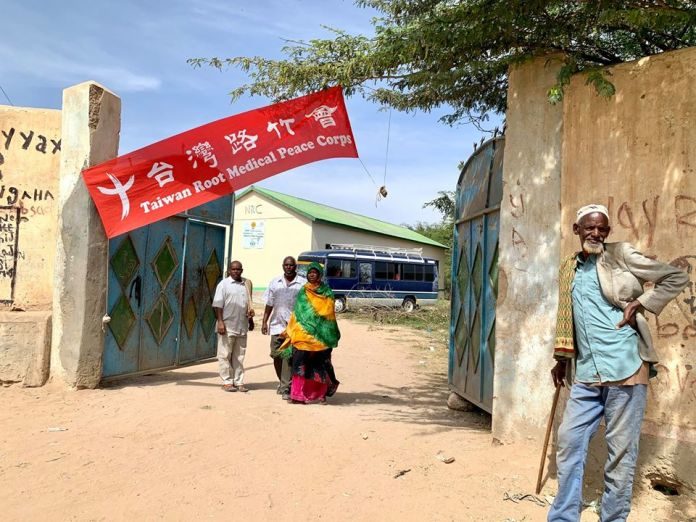 It took about 36 hours of flights and overlay to arrive at Hargeisa, the capital city of Somaliland, stopping at Malaysia, Singapore, and Ethiopia. The final leg is by a small propeller airplane that made the sound like in the old movie. From the airplane window, East Africa seems to be flat and very dry.

At Hargeisa airport, after we passed the immigration, they collected all our passports, and refused to give it back to us. The 32 members, and 43 boxes of medical supplies, waited while our leaders and our local contacts were in heated discussion with the local officials. We were prepared to leave the country in the next flight if we did not get the passport back. After one hour of yelling and phone calls, we got our passport back.

When we finally walked out of airport, the sun was setting and the calls for prayers are in the air. A TV crew were there waiting for us. The news can also be viewed at https://youtu.be/-GfT9EGt82s.

The long flights were hard, but not as hard as what we are going to see in the next 2 weeks.

Since Somaliland is not recognized, international donors have found it difficult to provide aid. It does not have tourist business. It does not have foreign investment to help build factories. Most stuff we saw in the store, from shampoo to potato chips, is imported.

Without jobs, how do people make a living? According to Wikipedia, remittances from the large Somali diaspora contribute immensely to Somaliland’s economy. People go out of the country to make money and send the money back home.

However, I was told the people here are happy because they simply do not worry about the things we usually worry about. 70% of population here are nomads. In Nomadic society, where people move from place to place with their animals, the concept of assets or ownership is very different, so are their human relationships and society structure.

When nomads settled down in the city, they still keep their goats, which running around the city streets, but only as pets. In the city, some of them have hard time adjust to a lifestyle with assets, eg, a house, or a job to make a living. But that does not trouble them. I was told everybody is related to somebody here, and when they ran out of money or food, they just asked their relatives.

Their culture is the people with money always give to people without money. This is the amazing system that keeps Somaliland people in good spirit through the civil war, 1988 genocide of 200,000 civilians, drought, locust attack and on-going poverty.