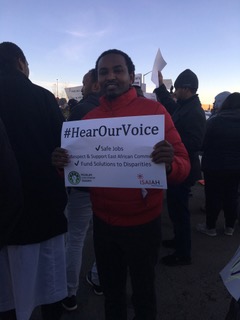 Minneapolis – Chanting “Together we can make history/in every warehouse, in every city,” nearly 500 workers and supporters rallied in support of East African workers here on Dec. 14. The workers have stunned the country by forcing industry giant Amazon to negotiate with their demands, a first-of-its-kind achievement.

The Dec. 14 protest took place on a Friday afternoon at the Amazon Fulfillment Center in Shakopee, nearly half an hour from downtown Minneapolis. The rally was timed so that workers walking out after their shift could directly join with jubilant supporters on the picket line.

Workers took turns expressing their grievances with the corporate giant to the eager crowd of supporters. Chants such as “Amazon, hear our voice!” and “We’re people, not robots” were conducted in English as well as Somali, Amharic and Oromo.

The struggle waged by the workers from East Africa at the Shakopee facility constitutes the first time that U.S. workers have brought Amazon management to the negotiating table, according to the Nov. 20 New York Times. Though management has conceded some demands since negotiations began, the workers at the rally stated that Amazon’s response has not come far enough. (tinyurl.com/y9q9ndya)

The Minneapolis protest, organized by the Awood Center, represents a new stage in the burgeoning movement for collective bargaining rights in the U.S. The Awood Center is described on the web as “a place for the East African Community to learn, defend our rights at work, and build East African worker power.”

Health care is one of the key issues for the East African workers. The barriers to health care they experience at Amazon are all too common for many workers in other settings in the U.S.

The story of Khadra Kassim, who was pregnant when she was injured while performing her duties at Amazon, has been widely reported, including in the Times. While the media correctly reported Kassim was turned away when she went to the Amazon on-site medical office, key facets of the episode have been omitted.

Kassim stated at the rally that she had not at first been aware there was such a facility. The company had not sufficiently informed her, and they had not put in place adequate Somali-language communication. She was also turned away because she was a “new hire,” as the company-provided health insurance only activates after a worker has passed a probationary period arbitrarily set by management.

Kassim pointed out at the rally that she has been out of work since September due to other work-related injuries. Amazon has not helped her with those either.

‘We are not robots’

Rashid, a young Somali man who spoke, noted that the effort to organize workers at Amazon was easy because many workers were already united in their indignation with the company. He attested that Amazon has not so far taken a retaliatory approach in response to the workers’ organizing, but perhaps that’s only because of the tight unity among the workers, based on shared culture, language and community.

Rashid exhorted workers around the country to join the struggle for workers’ rights: “Amazon thinks we are like robots, but we are not robots. They want us to compete with robots, work like robots work and have the same speed. … I think everybody in the world has the same problem, but they are not having their voices heard.”

Rashid also stated that workers should not back down even in the face of powerful companies like Amazon. Because no matter how strong they can appear, the struggle of the workers at Amazon proves that big business can be brought to negotiations through concerted worker actions.