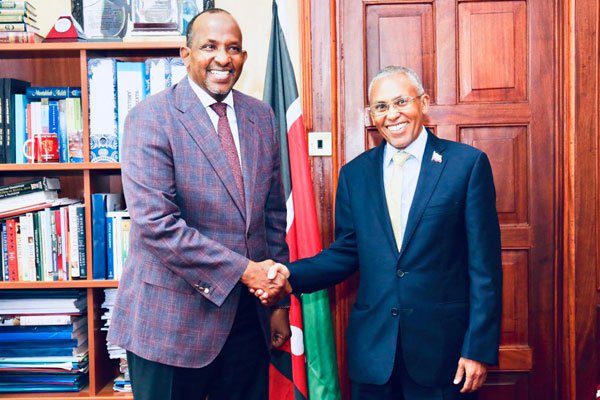 Kenya and Somaliland are exploring ways of working together in the education and agricultural sectors to grow their economies.

The Horn of Africa nation is also keen to learn from Kenya’s democratic system of governance.

Somaliland Foreign Affairs Minister Saad Shire is in the country for a series of meetings with Kenyan leaders as he pushes for stronger diplomatic ties between the two counties.

“We have so much to learn from Kenya especially on governance and constitutional democracy,” Dr Shire said.

Dr Shire called for a meeting between the Kenyan National Assembly Speaker and his Somaliland counterpart.

Mr Duale said that Kenya has been working closely with the Somaliland with a view to finding a lasting solution to the conflicts facing the Horn of Africa region.

“We are happy with the success stories coming from Somaliland and we hope other regions can learn from you,” Mr Duale told Dr Shire.

The two met on Wednesday in Nairobi at a function by United Nations to fete world marathon record holder Eliud Kipchoge who was named the UN Personality of the Year 2018.

During the meeting, Dr Shire invited Kenyan investors to explore the opportunities available in Somaliland.

“We have so many openings for Kenyan investors. We also need to look into how we can work with Kenya in the area of education. We already have Kenyans teaching in our primary and secondary schools and in our universities,” said Dr Shire.

He added: “We are happy to have an operational embassy in Nairobi with an envoy who is keen on strengthening ties between the two countries. We are inviting Kenya to set up an embassy in Somaliland.”

There have been plans to have direct flights from Nairobi to Hargeisa. The national carrier Kenya Airways has already sent a delegation to do a feasibility study on the Egal International Airport in the Somaliland capital.

Over 15,000 Kenyans are living and working in Somaliland in the hospitality and education sectors.

“There is so much Kenya can export to Somaliland especially agricultural products, while they can also import livestock products,” Omar said.