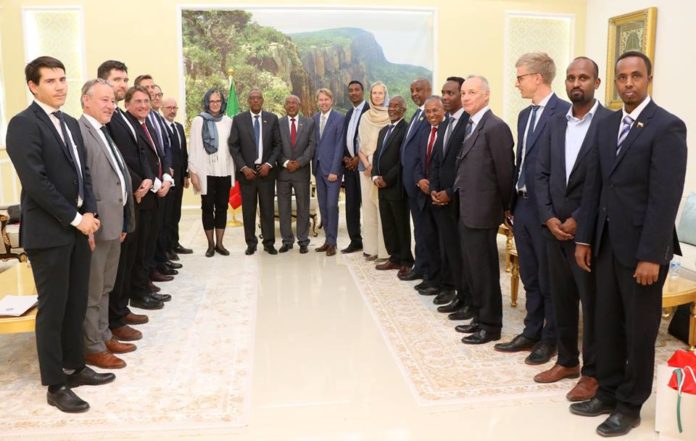 The president of Somaliland Musa Bihi Abdi on Tuesday received a high-powered EU delegation that arrived in Hargeisa. The high-powered EU delegation consisting of ambassadors from Denmark, Norway, Finland, Sweden, Switzerland, UK and the EU envoy paid an official working visit to Somaliland. The FM, Mr. Mohamud Faraton said that the two sides discussed on ways to enhance SL ties with the nations in the Horn. The FM said that the two sides talked about ways to exchange views on how to develop overriding issues ranging from political, trade and security. Danish ambassador, Ms. Mette Knudsen has told that the delegation held fruitful discussions with the president. She said that she raised with the president to observe the integrity of Somaliland in the eyes of the world concerning the polls and the thriving democracy. The President has assured that free and fair parliament and local councils polls will be held. Ms. Mette also discussed with president Musa on humanitarian relief to drought hit communities and projects aimed at developing Somaliland. Danish ambassador, Mette Knudsen, EU ambassador, Pencho Garrido Ruiz, UK ambassador, Ben Fender,  Swedish ambassador, Andreas Von Uexkull, , Norwaygian ambassador,Elin Bergithe Rognilie and were accompanied by staffers from Finnish and Swiss embassies.