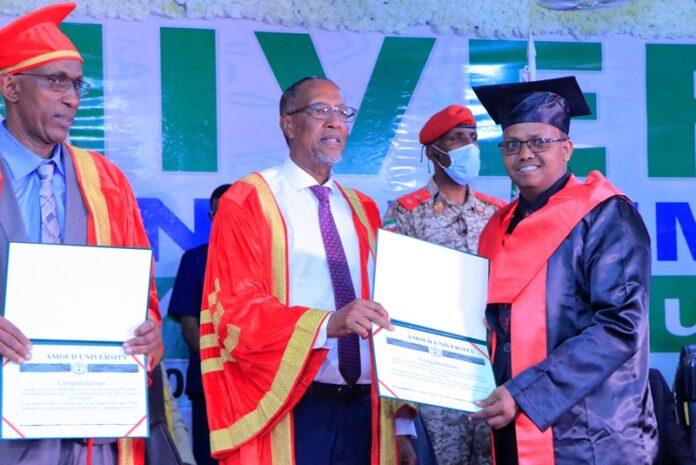 This 19th batch has just seen 945 graduates being churned out from the various faculties of the university.

808 students have just completed their basic degrees whereas a record 136 have just been awarded their master’s degrees. He also inaugurated the long awaited Amoud bridge, which in essence, was his own initiative.

In his speech, the Head of State emphasized the roles that the higher institutions of learning the world over usually played in being think-tanks, hence gave recommendations on the ways and means of addressing socio-economic or associated issues.

“Every societal hiccup that arises anywhere in the world is usually addressed professionally through advisories by institutions of higher learning,” said the president.

In the same breath he called for the local universities led by Amoud University to take cue, hence, give technical advises as applicable as per the social needs of the nation.

The President noted that the Awdal region is noted for being in the lead throughout the country as far as peaceful stability, affluence and professional know-hows are concerned.

The president inaugurated an ultra-modern college canteen at the campus hence at the same time launched the construction of tarmac roads and lanes within the institution.

The Minister of Education who flanked the President pledged in his speech that the education department will always be at the forefront in supporting the college in furthering their initiatives.

He at the same time challenged the institutions to be progressively inventive hence come up with novice deeds or ideas.

The head of the university who has been at the epitome of its leadership for quite a while Prof Suleiman A. Guleid congratulated the students and the college fraternity for their efforts well-earned and done.

Earlier on as the President toured the region, he was tumultuously welcomed by the local populace who thronged the roads especially at Dilla, Tulli, Goraya-awl and lastly at Borama itself.

Of note is the major bridge that was the president’s own initiative and brain-child was inaugurated by the Head of the State himself, which connected Borama to Amoud itself.

The bridge over the seasonal river and near the university was direly needed for a quite a long time.