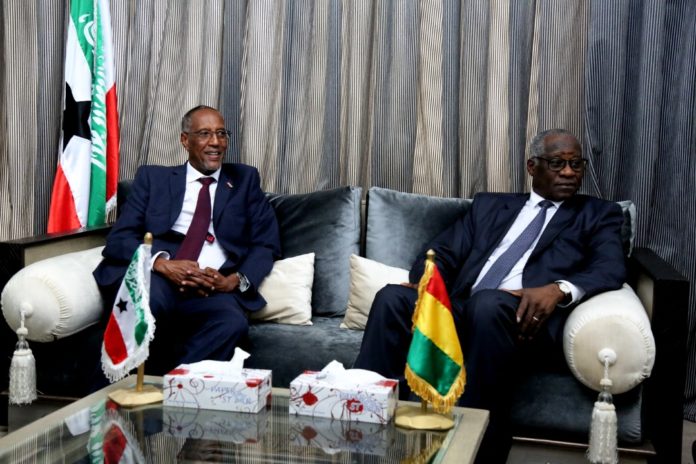 Somaliland has made another diplomatic breakthrough with the state visit of the country’s president Musa Bihi Abdi to Guinea.

President Bihi is on state visit to the West African nation of Guinea, on invitation by President Alpha Conde.

The visit is a sure sign of Somaliland’s rapid acceptance across the African continent and its growing economic and trading links with other nations. President Musa Bihi and President Conde pledged to find ways working together in trade and fostering cooperation.

The Somaliland government is steadily building its case for recognition on the basis of trade and business opportunities with its fellow Africans, arguing that an independent Somaliland capable of trading with African and international partners will be a benefit to all and strengthen peace, prosperity and security.

Bihi who came to power after a peaceful, free and fair election with a peaceful transfer of power only 18 moths ago has been on a shuttle diplomacy to build Somaliland’s case for recognition. He has already Ethiopia, Djibouti, the United Arab Emirates.

Somaliland already enjoys warm and growing ties in East African, most notably with Kenya and it is keen on marketing itself as a new and profitable frontier economy in the region with considerable untapped resources.

Unlike neighboring Somalia which continues to be ridden with violence, instability and terrorism, Somaliland is enjoys stability and peace.

Unlike Somalia which continues to battle Al Shabaab on a daily basis despite massive support from AMISOM peacekeepers has suffered 589 documented acts of terrorism and assassination. By comparison, Somaliland has see only 1 act of terrorism in 27 years.

This peace and stability and open market economy is the reason why 10,000 Kenyans have made the journey to Somaliland in search of jobs and economic opportunity. Kenyans can be found living freely and making a good living in the Somaliland capital, Hargeisa working as teachers, hotel managers, restauranteurs, architects, advisors in agriculture, construction and much more.

“Of course the two countries will be discussing matters of mutual interest during our stay in Guinea,” the minister said.

Guinea is richly endowed with minerals, possessing an estimated quarter of the world’s proven reserves of bauxite, more than 1.8 billion metric tons of high-grade iron ore, significant diamond and gold deposits, and undetermined quantities of uranium.

Recent geological surveys indicate that Somaliland also has abundant deposits of gemstones, from emerald to aquamarine, ruby and sapphire as well as vast amounts of garnet, quartz and opal as well as lesser-known minerals such as titanite and vesuvianite .

Somaliland also is known to be a highly promising country for oil and gas. Two international oil exploration companies, the British company Genel and the UAE based RAK Gas will begin drilling their first exploration wells early next year. No doubt the Somaliland delegation will want to learn from Guinea’s experience in this field as the International Monetary Fund {IMF} has identified mining as the key sector in Guinea’s economy.

“The Guinean economy is growing at a fast pace, driven by a buoyant mining sector,” Giorgia Albertin, the IMF’s mission chief for Guinea, said previously.

Somaliland finance minister Dr Saad Ali Shire who is part of the delegation to Guinea said the tour is to learn how the country has modelled its economy especially in the mining sector.

But there are other untapped business opportunities that Somaliland wants to attract African investors and companies too. Somaliland has an 900km coastline with some of the richest seafood and marine resources which is barely touched as well as fertile agricultural lands which remain uncultivated. But the economic transformation of Somaliland is already underway with the $450 million investment by the UAE global logistics company DP World currently transforming Berbera port in Somaliland into a regional transportation hub.

On the flipside, Somaliland’s economy is currently vastly dependent on remittances from its committed diaspora community, which provide 55% of the GDP. The country too is active in livestock exportation. President Musa Bihi aims to foster deeper and closer links with African countries on the basis of trade, business opportunities and investment in order to transform the economy of Somaliland and benefit African partners. Guinea is the third African nation the Somaliland president has visited this year after his visit to Djibouti and Ethiopia in February. However, another crucial part of President Musa Bihi’s visit to Guinea is to build a case for the country’s international recognition which is slowly but surely gathering momentum.