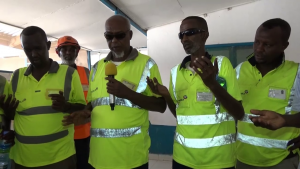 The construction workers at Berbera port expansion have gone on strike on Thursday, citing that daily wages have been reduced.

The workers have cried foul over the recruitment of foreign blue collar workers who put their jobs at risk. They have complained that the citizens are idle in the township.

The construction workers who have protested against the local firms that have signed the deal with Dubai Ports World and have accused them of not giving them their rights.

According to the workers who stopped the operation claimed that the local firms have earmarked for them to earn 30 dollars on daily day basis but currently they are paid 75000 Somaliland shillings.

They also protest over lack of accommodation  and health benefits that local workers are not given in lieu of foreign blue collar workers.

Several dozen workers gathered and briefed the local media corps on their current ordeal that they have encountered.

They sent a plea to the president and the minister in charge of labor affairs to urgently intervene in this matter.