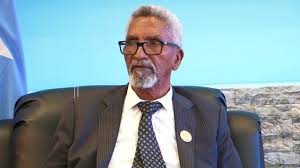 Somalia’s Senate Speaker, Abdi Hashi Abdilahi, has debunked that any deal has been reached on the electoral process for Somaliland members of the parliament.

He put the blame on president Farmajo and his government of spreading speculations to the public.

The senate speaker also said there are no two factions of SL but the problem is that  president Farmajo seeking any excuses to return to power.

He also said that there were no representatives of Somaliland people in the consultative meetings over the electoral deadlock.

Somaliland government affirmed that Somalia’s electoral process has nothing to do with SL and no one will represent them in the polls.

Somalia’s election process was marred by protracted row between the Federal Gov’t and political stakeholders in Somalia.