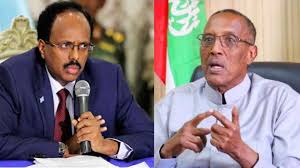 HARGEISA– Somalia’s president, Mr. Mohamed Abdilahi Farmajo is to hold the first face to face meeting with Somaliland president, H.E Musa Bihi. The two leaders are due to meet in Addis Ababa in the days to come. The Somali leader visited Burundi but is currently in Djibouti and is planned to travel to Ethiopia where he will hold talks with his Somaliland counterpart. Ethiopia extended an invitation to the Somalia and Somaliland leaders where the long stalled talks between the two regions are expected to be commenced. The plan is that President Bihi of Somaliland is due to visit Ethiopia today. Djibouti was striving to bring the two Somali leaders to resume the stalled talks but Ethiopian PM proposed that the leaders must hold their first face to face meeting. President Bihi of Somaliland has accused the Farmjo led government of suffocating Somaliland’s search for development project. The agenda of the talks are not known but it is believed that the two leaders will have a gathering aimed to pave the way for the official resumption of the dialogue between the two regions of Somalia. Somaliland broke away from Somalia in 1991 but it has not been recognized by the IC.