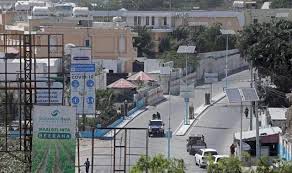 Two rival forces continue to occupy positions on the rooftops of Somalia’s President and Prime Minister’s offices inside the presidential palace.

This was a statement quoted from an opposition figure days after alleged coup attempt led by a military escalation in the capital Mogadishu.

The leader of Wadajir opposition party Abdirahman Abdishakur said during a ceremony held to condemn failed coup attempt allegedly orchestrated by Farmajo to depose the government.

He said troops still remained at rival positions inside the presidential palace in Mogadishu.

Dozens of military vehicles, some fitted with artillery weapons and heavily armed troops loyal to the Prime Minister gathered outside the presidential palace on Monday, hours after the president said he had suspended the PM over allegations of corruption.

The Int’l partners in conjunction with the forthcoming National Consultative meeting would try to assist pull back and remove one of the disputing  strongmen from the compound if tensions were to be de-escalated.