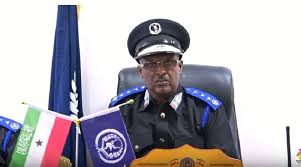 Police complaints must be dealt with in accordance with the law, says Police Chief

Hargeisa:-  The Commander of the Somaliland Police Force Brigadier General Mohamed Aden Saqadhi (Jano-gale) has apologized to Hoodo Garays and her mother Suleekha Aqil for the unfortunate incidental fracas that befell them at a local police station in the city recently.

He promised that he would institute a formal investigation into the matter and that whoever is found to be culpable would face justice.

Brigadier General Jano-Gale received in his office over the week Hoodo Garays and her mother, Suleekha Aqil Abdillahi hence apologized for the inconveniences caused upon them by some of the officers at Mohamud-Haybe police station, assuring them the Police Force will fully bear expenses of their medical check-ups and medical fees incurred for any bodily harm they have been subjected to.

The meeting between the police chief and mother Suleekha & her daughter comes days after the incident was widely reported on social media, and some opposition parties and the public reacted in different ways.

The police chief cautioned opposition parties and public groups blowing issues out of proportions that in effect would hamper future cooperation between the members of the public and Police force.

Brigadier General Mohamed Adan acknowledged that occasionally individuals usually err and that personell in his department are not immune, but warned categorically that “Police complaints must be dealt with in accordance with the law,” as stated by Police Commander Jano-gale to Dawan reporter Mohamud Walaleye.

The action has expectedly put to an end the Hoodo issue which evoked backlash from members of the public, who have since, praised the move by the police chief.