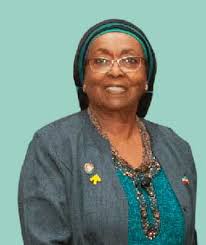 “As detailed in my memoir, ‘A Woman of Firsts,’ my own parents lost two of their five children because of poor maternal and child health services in my country,” the former Somaliland Foreign Minister and founder of Edna Adan Hospital says.

“My mother lost one baby to a forceps delivery when a Caesarean section could have saved the foetus that had become impacted in her narrow bony pelvis.”

Several years later her parents lost a second baby who was “delivered alive but was then accidentally dropped by the untrained midwife who had delivered it. The newborn fell on his head and died instantly.”

Because of this tragedy, midwifery became her lifelong passion.

When Ismail returned from the UK to Somaliland as the country’s first qualified nurse-midwife, she found herself faced with a myriad of problems during pregnancy and childbirth. These were due to education, poverty, unemployment and because of the damage caused by female genital mutilation (FGM).

Women also did not have a political voice.

These conditions led her to a lifetime of activism which led to the setting up of women’s organisations which could put pressure on the government and political parties. Working for the World Health Organisation also helped in spreading the word.

“What really inspires me today is how far we have come but also how far we still have to go to achieve our goal of equal human rights for all,” Ismail says.

The distance to needed to travel was starkly highlighted in WHO’s “Cost Calculator” released earlier this year. The organisation estimated that FGM incurs a massive economic cost of about for $1.4 billion annually treating health complications arising out of FGM practices. This is based on 27 countries on its dataset.

“I know many battles have been won during the past 42 years and the fact that the world knows about it is proof that our message has been heard,” she says.

Women Deliver Young Leader Sawo agrees there is no easy solution to FGM.

“In my experience in The Gambia, there is sometimes a gap between the laws, knowledge and practice, whereby existing laws to combat FGM or knowledge of the negative health consequences of FGM do not always influence the exercise of this practice within communities,” Sawo says, pointing out that there “instances where gaps in the law create minimal protection of women and girls from FGM.”

Ismail acknowledges this but says: “I know many battles have been won during the past 42 years and the fact that the world knows about it is proof that our message has been heard.”

Ismail advocates for fathers and young leaders to become involved in the fight against FGM. “We strongly wish for and welcome the support of fathers whose daughters are the ones who are being damaged to the point that they may not be able to one day give them the grandchildren every parent wishes for,” Ismail says.

The solution to saving the young girls, is, however, for society to take a stand. Parents, traditional and religious leaders, legislators, activists, and women’s organisation tall have a role to play.

“Passing a law alone will not be enough, and at the end of the day, we cannot put all our mothers and grandmothers in jail. Legislation that punishes the one who performs FGM is the kind of legislation that I would like to see.”

Young people’s voice in this is vital – and Ismail is adamant that within her university, all must take a stand against it.

It’s been more than 25 years after the International Conference on Population and Development (ICPD. Governments and civil society are in the process of developing ambitious programmes of action for the next decade to meet the Sustainable Development Goals.

As an African woman, who is a health practitioner and a gender equality activist, Ismail wishes to see “concrete actions that prioritise the health and rights of girls and women.”

While organisations and governments left the 2019 International Conference on Population and Development (ICPD) in Nairobi motivated to achieve the development goals for women and girls, is task not going to be an easy one.

The United Nations Population Fund (UNFPA), puts the cost of delivering Sustainable Development Goal #5 on gender equality and empowerment of women and girls over the next decade at $264 billion, with $683 million needed to address sexual and reproductive health services for women and girls in conflict areas.

For Ismail and her interviewer Sawo young people in particular have a critical role to play.

“Become better educated, study the issue thoroughly, develop your strategies collectively, make your voices heard as a group and through written articles, research results for publication and discussions in the local media and journals,” Ismail says.

Most of all Ismail’s message is:
“Learn what works from others and share with them what has worked for you. Never give up!”