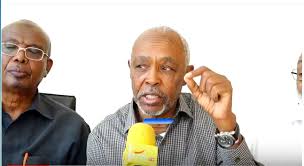 HARGEISA—Professor Yasin said the group submitted a lawsuit against the decision of the house of elders to extend the term of the houses of representatives and elders.

This is the second attempt of the group to challenge against the decision of the council of elders in the court.
“Our ultimate objective was to show our people that we live in a country of laws. That it is possible for people to bring lawsuit. One of our first case was dismissed. We have brought this one as individuals. The defendants are a dozen of people. The court argument of our case was not addressed that there was no possible cause to extend the term for the bicameral parliament.” said Yasin
The group first challenged the decision of the council of elders at the beginning of this month. They argued that the term extension was not in line with the constitution since there was no credible cause of extending the bicameral parliament.
Another leader argument of the group is that the extension enfranchises the constitutional rights of Somaliland citizens to choose their representatives.
However, the constitutional court dismissed the case within few days on the grounds that it lacked the legal personality since it was not officially registered as an organization.
Professor Yasin said that he was nor hopeful that the court will not rule justly on their case.
However, the group insisted on lodging the case.
He said to demonstrate that Somaliland is a state of laws.
“Let us see what they do now. We will not stop even if our case is dismissed again because there is no other option. WE have to teach our people that they can lodge a case in courts and the constitutional court needs to listen to the people. Justice is the best interest for all of us.” said Yasin
Somaliland constitutional court has never reversed a term extension made by the house of elders.
The group of National Consultation and Rectification Forum compromises of retired politicians and former veteran officers of Somali National Movement (SNM).