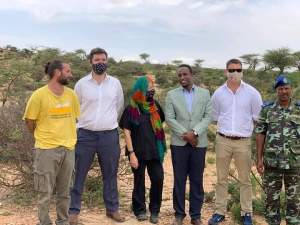 The Director General of the environment & rural development ministry, Abdinasir Ahmed Hirsi, yesterday embarked an inspection visit to a forest park that lies in Geed-Deeble which is located in the north of Hargeisa. The government of Somaliland under the shrewd leadership of president Musa Bihi Abdi is planning to turn the forest into a National Park where Somaliland’s wildlife which is facing extinction will be provided with welfare and protection from poachers and wild animal smugglers which is a booming business in Somaliland. Cheetah Conservation Fund (CCF) in conjuction with Africa Park Network are assisting the government of Somaliland to transform the park into a national one. The DG inspection tour was accompanied by CCF officials and Honorable Stuart Brown who is the head of UK mission to Somaliland. The environment and rural development ministry in conjunction with Marodi jeh provincial authority, Darasalam district authority, Hargeisa water agency, Nadford and refugee and IDP’s agency in Somaliland have relocated 250 families mainly of nomads and other families. The families which were not nomads were re-settled in Darasalam district. The ministry of environment & the rural development expressed thanks to Somaliland President who has stood by the ministry once the operation was underway and allocated funds for the realization of the project.