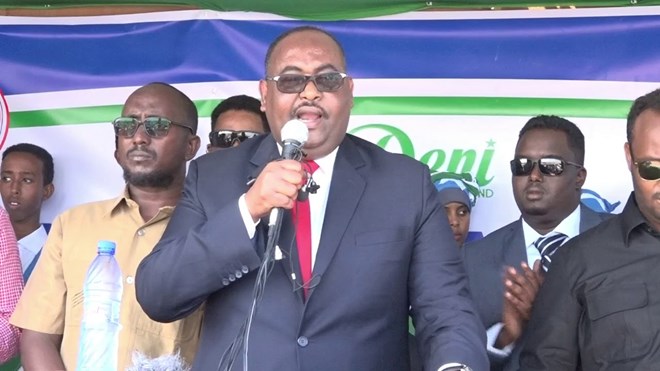 When Villa Somalia scored its first major victory in Baidoa last December after deploying its economic and security might to dethrone political maverick Sharif Hassan Adan and install its ‘first man’ in the regions, there was a sigh of relief in Mogadishu after a near two yearlong political battle.

The exit of another significant political nemesis Abdiweli Gaas in Garowe was also a breather even as HirShabelle’s Mohamed Waare was already in the fold of Villa Somalia after breaking ranks with his colleagues in the CIC bandwagon.

But this past week’s remarks by newly elected Puntland President Sai’d Abdullahi Deni and Waare’s threats to cut ties with Mogadishu early this month over what he termed as neglect amid unfolding humanitarian crisis in HirShabelle just served as a reminder that Villa Somalia may go into the second half of the term with yet another endless political circus.

Yet again, the move by Federal Member State leaders to snub the National Security Council which had been slated for April 19 affirmed that nothing had really changed after all. The Council of Inter-State Cooperation (CIC) thought to have ebbed out with Gaas and Adan’s exit could be in for a major revival given the political temperatures in the country.

NO CHANGE IN GAROWE

Villa Somalia failed to put through its man in Garowe in place of Gaas but even so, Deni was seen as a moderate who would continue the fiery and tough stance of his predecessor. But as it now stands, he could yet prove to uphold his predecessor’s love-hate relationship with Mogadishu.

Following his return from Dubai and Nairobi Saturday, Deni, just like his predecessor upon arrival from such visits threw jabs at the Federal Government for shortcomings in security, the appointment of central bank governor and the constitutional review process.

Deni accused the FGS of obstructing and frustrating the constitutional review process for failing to incorporate the 6 members from the FMS close to a year after the agreement was reached during the Security Council meeting in Baidoa last June. “It was agreed that five people from the federal government and six from the federal member states be included in the Constitutional Review Commission but that has not yet happened,” Deni told reporters in Garowe Saturday.

The Puntland leader also accused the Farmaajo administration of run-away insecurity in the country and lack of coordination in the security sector among the states and the federal government. On the appointment of the Central Bank Governor, Deni said the position ought to have gone to Puntland in tandem with the 4.5 power sharing system.

But Deni will be hosting the FMS and FGS leadership in Garowe tomorrow. It will be the first such meeting since July 2018. Should this meeting materialise, then it might form the basis for the beginning of a probable new chapter in the two years of political turmoil between the two levels of government. It provides the golden opportunity to reset relations between the two levels of government.

The FGS and FMS leaders must head to Garowe cool headed knowing all too clear the meeting is not the business of 8 men but that of a whole country. Somalis have been treated to the theatre of the absurd in the last two years with major milestones especially in the security sector missed owing to endless running battles between Villa Somalia and the rest of the Villas in the country.

On the flipside, one cannot bank on any tangible results emerging from this meeting. Villa Somalia had perfected the art of ‘by all means necessary’ approach in dealing with political challenges in the country. The ouster of Sharif Adan and the forceful withdrawal of Mukhtar Robow in the South West presidential race last December exemplified the breadth and width the Khaire and Farmaajo brigade can go along in getting what it wants.

Virtually all the grievances raised by the CIC from 2017 remain unaddressed. There is not yet concrete agreements on the implementation of the National Security Architecture which the UN warned last month was stalling. The fate of next year’s general elections is also still on the balance as there is not agreement on the electoral formula.

Galmudug is still deeply steeped in political pandemonium. Besides the long running political battles between President Ahmed Haaf and State parliament speaker Ali Ga’al Asir, there is the issue of elections. Haaf and Alhusuna Wal Jamaa head who serves as Chief Minister Mohamed Shakir are now bonded together in a term extension deal which would see the central Somalia state go to elections in 2021. The federal government has said never!

Former Presidents Hassan Sheikh Mohamud and Sheikh Sharif Ahmed have both called on President Farmaajo and Prime Minister Hassan Khaire to ‘humble’ themselves and listen to counsel. You cannot watch as the camel goes astray to be mauled by wild animals, Ahmed said Saturday, “It’s time to shepherd this country to the right path before it strays and gets destroyed.”

Perhaps this might be the right time for both Farmaajo and Khaire to climb down from the high alter of righteousness and accept not only counsel but also pull back from its forceful approach to disputes. As the old adage goes, when a father and his sons are locked in disputes, the father should always be the first to offer the olive branch.

But focus is not only on FGS but the FMS leaders too must strive to be concessional. They (FMS leaders) should be willing to step back from their stance against Mogadishu and give room for a compromise deal.

Somalis and the international community will be watching to see what comes out of the Garowe meeting tomorrow.