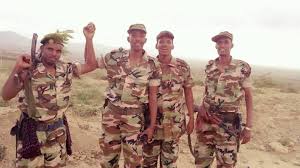 The Commander cited the recent used of rubber batons to disperse violent protesters as a clear sign of departure from the days personnel used live bullets to crush dissent.

“There could be people who were wounded as a result of the police’s use of rubber batons, but no soldier fired a single bullet,” he said.

According to him, the protests of last Monday in the Shabelle district of the Somali Regional State carried offensive weapons but his forces managed to peacefully dispel them.

The BBC report quoted him as saying 10 of his officers were wounded as a result of the incident. Protesters were challenging a government ban on the putting up of new settlements as a move aimed at curbing ethnic clashes over land.

Who are the Liyu police?

Ethiopian authorities created the Liyu (“special” in Amharic) police for the Somali region in 2007, when an armed conflict between the insurgent Ogaden National Liberation Front (ONLF) and the government escalated.

Abdi Illey became the president of Somali Regional State in 2010, and the Liyu police continued to report to him till his arrest in August 2018. He is currently facing a legal process instituted by federal government.

The Liyu police have frequently been implicated in extrajudicial killings, torture, rape, and violence against people in the Somali region, as well as in retaliatory attacks against local communities.

There has also been growing evidence of attacks by the group against communities outside of the Somali region, including in the Oromia region since late December 2016, and in Somalia.