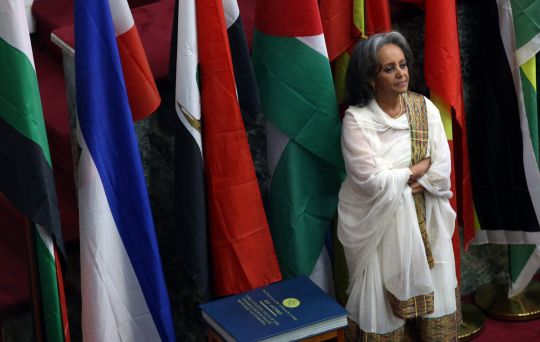 Ethiopia has appointed its first female president, heralded as a ‘historic’ day for the country. Lawmakers unanimously elected Sahle-Work Zewde today, days after approving one of the world’s few ‘gender-balanced’ Cabinets. Seasoned diplomat Sahle-Work Zewde succeeds Mulatu Teshome in the largely ceremonial post. ‘In a patriarchal society such as ours, the appointment of a female head of state not only sets the standard for the future but also normalises women as decision-makers in public life,’ the chief of staff for Prime Minister Abiy Ahmed said in a Twitter post.

Sahle-Work called Ethiopia’s recent transfer of power to the reformist prime minister ‘exemplary’ and said she will focus on bringing together all sides to achieve peace in a country with multiple ethnic-based conflicts in recent months. Ethiopian lawmakers last week approved a new Cabinet with a record 50% female ministers, including the country’s first woman defense minister. Sahle-Work Zewde recieves a book of the Constitution from Ethiopia’s former President Mulatu Teshome (Picture: Getty) The moves are the latest in sweeping political and economic reforms in Africa’s second most populous country since Abiy took office in April following months of nationwide anti-government protests demanding wider freedoms. Sahle-Work has worked within various United Nations organs and was the first director-general of the UN office in Nairobi. Until recently she was the UN secretary-general’s special representative to the African Union. 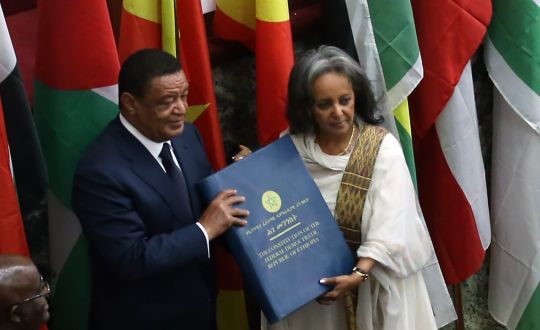