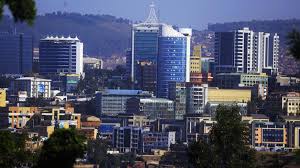 I was among the first passengers to disembark, and I immediately proceeded to the immigration desk.

I cleared with the immigration in less than 10 minutes and found myself already out of the arrivals’ gate eagerly looking forward to seeing city often described as “Africa’s cleanest city”.

Looking around, I immediately sensed that I had landed in a city that is entirely different from those I previously visited on the continent. Clean and quiet.

I woke up to a morning breeze with a scenic sunrise view from my balcony and beautiful voices of birds, my eyes wandered out to the mountain above the landscape around the city.

I saw people rushing to offices, children walking to school, many in their blue uniforms and traffic officers proudly performing their duties in major junctions of the city.

There was not a single moment when I thought this country has ever gone through civil war.

Yes, Rwanda has experienced a civil war and the 1994 Genocide against the Tutsi, which is one of the most heinous massacres known in modern history, in which over a million people would be killed in just 100 days.

Nobody had ever thought the country would rise from the ashes and would flourish in an unimaginable pace. However, for the past twenty-five years, something remarkable has happened in Rwanda.

People are no longer consumed about the past tragedies, no discussions on tribal divisions, reconciliation has taken root and much of the wounds have healed.

The country is now not known for the atrocities that happened here quarter-century ago but as a destination for high-end tourism.

Kigali is one of the fastest-growing economic cities in Africa and the country has even legislated gender equality having more women in the parliament than any other government in the world.

People are coming here in flocks from all over the world for different reasons, some to spend their vacation, some to visit the iconic and historic places of the country to learn lessons.

I was among those who were seeking clues of how Rwanda managed to achieve such incredible successes in peace and security in a short time.

Looking at what has been achieved in Rwanda for the past 25 years, only made me wonder if my country Somalia could borrow a leaf to fix the thirty-year-old conflict.

What can Somalia learn from Rwanda?

So, I did little research and spoke to a few people looking for answers. There are two models that I found very interesting used by Rwanda to heal its past wounds which I think can be replicated in Somalia.

In 1999, Rwanda established a National Unity and Reconciliation Commission (NURC) with a mandate of working towards a reconciliation of a nation that had descended into a genocide due to decades of ethnic-centred hatred entrenched by successive post-independence governments.

This might be a contentious issue in my country Somalia since many groups are involved in the conflict either as offenders or perpetrators.

The Kigali Genocide Memorial is the biggest memorial centre and final resting place of 250,000 remains of the Genocide against the Tutsi.

Since the beginning of Somalia’s civil war in 1991, thousands of people have been killed, many more have been left with permanent injuries, and millions were forced to flee from their homes.

Up to today, there is no official and exact numerical statistics of casualties resulted by war, there is no single memorial place for the deceased except the “Tomb of the Unknown Soldiers” which was dedicated for the unknown fallen veterans in 1997 war between Somalia and Ethiopia.

Preserving our past night have helped our society to reflect on what happened and perhaps teach them a lesson to make sure it never happens again.

There are few other conflict resolution models implemented in Rwanda which has been very successful over the years but due to cultural and religious differences and the nature of Somalia’s conflict which has taken different shapes it might not be applicable to be used in Somalia but I hope nothing but best for both countries.

The writer is a Somalia based blogger and human rights activist who writes mostly on issues around social justice, conflict and peace.